NGSpy will be presenting his first budget to the House of Commons which is expecting to sail through the House of Commons with the support of the Libertarian Party UK. If it passes it will be the first non Conservative budget to pass in recent times and signals end to the Conservative Parties influences to the nations finances for the time being. The Chancellor has defeated all the odds and his critics by reaching a budget agreement and will no doubt be elated as he sips his whisky.  However, what does the budget mean for you?

A tax cut for millions

One of the headline policies of the budget is changes to National insurance contributions which will take many of the lowest paid workers out of paying NIC’s all together as the Chancellor brings the payment of NIC’s in line with the personal allowance. Ordinary working families could see a tax cut of up to £1,000 and many will no longer have to pay NIC’s.

The budget also puts the brakes on tax rises proposed by the Clegg coalition meaning that tax rate will be frozen at 17%,39.5% and 42% meaning that from next year working people will not pay more in income tax.

The passage of the budget will mean the next time you go to the pub you drinks will be cheaper. The budget changes the way alcohol is taxed, there will now be a consistent approach to alcohol taxation with alcohol being taxed on the amount of ethanol in a drink. The budget sets the rate a flat rate of 9p. This budget will be handing out an £8bn tax cut on alcohol. Pubs will no doubt be celebrating and Britons will be able to have a drink without having to pay high rates of alcohol duty.

The budget also delivers lower tobacco duty and signals a reversal to the previous budget’s approach to tobacco taxation. Pundits hear /u/model-mili is elated.  Tobacco Duty will be halved and smokers across the country will be grateful to the Chancellor for easing the financial burden of regressive taxes.

The budget delivers increased block grants in line with the Holtham commission, something that the Libertarian Party and others in the House of Commons have been calling for. Devolved administrations will receive money as result of the changes by the Chancellor and will have more money to spend or to cut taxes in their respective devolved budgets.

Small businesses earning under £20,000,000 profits will see a fall in the level of corporation tax meaning they can retain more of their profits to invest. This was one of the Chancellor’s key promises through the term and this budget delivers it. In order to avoid a steep increase in the marginal tax rate, larger firms will also receive a corporation tax cut but the new corporation tax system will be progressive.

Another key policy that has been flouted by the Chancellor of dividend imputation features in the budget. The policy will allow corporation to claim tax credits and will loosen the burden of taxation of those who receive dividends. This move will be welcomed by shareholders and pension funds across the country. The Chancellor argues it removes the impact of double taxation in the tax system.

A boost for defence

Since last term, higher defence spending has been a hot topic in Westminster. The budget delivers a gradual increase in defence spending but at a lower level than the Blurple government planned. The budget increased the annual defence budget by £1.1bn in the upcoming financial year with defence spending rising to 2.3% gradually in 2024/2025. The extra funding will help fund the recent defence review.

DECC funding and a cycling fund

The Liberal Democrats have delivered key pledges including a cycling fund which was in their manifesto and the Queen’s manifesto. Northern Womble has also benefited from a budgetary error which had double spending for DECC due to confusion over funding allocations to the department of Business and DECC. The budget delivers a £10bn fund to tackle climate change alongside changes to the tax system to make the country greener. £10bn is a substantial sum of money by all accounts and no doubt will be championed as a win for the Lib Dems going into the election.

Deficit to fall with Debt to GDP to stabilise

The budget deficit is expected to peak next year at 2022/2023 before steadily falling due to savings in childcare and the Chancellor’s targeted tax rises on LVT. The budget corrects some errors in the previous Clegg with non-departmental budgets meaning public sector borrowing is higher than we thought. The government’s plan tackle the deficit moderately with Debt-GDP stabilising and ending up lower in 2024 compared to 2020 at 83.98% of GDP. 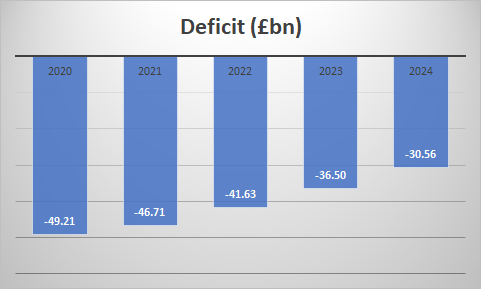